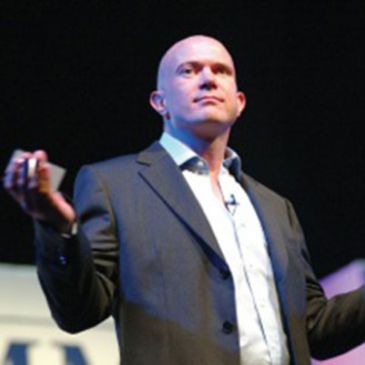 Awarded the title Britain’s Sales Trainer of the Year, and described by AstraZeneca’s Global Communication Director as “a genius, whose advice cannot be ignored”, Andy’s insights stem from the fact that his mother is blind. This has given him a lifetime’s experience of communicating from someone else’s point of view… so critical when seeking to persuade others.

Andy has spoken in 30+ countries, to audiences of all sizes. He’s delivered keynotes at the Professional Speakers Association Conference, as well as for Blue-Chip companies, governments, professional bodies and business experts.

His core belief is "it’s not what I say that counts. It’s what my audiences do differently after I’ve said it"

"Andy Bounds helped Barclays secure a £2.6billion deal, one of our largest ever… I firmly believe that we became the client’s trusted advisors because we adopted the ‘Andy Bounds approach’ throughout"

"The new vision is really making a difference... The clarity and simplicity of the message that you helped create has enabled me to get a lot of buy-in."