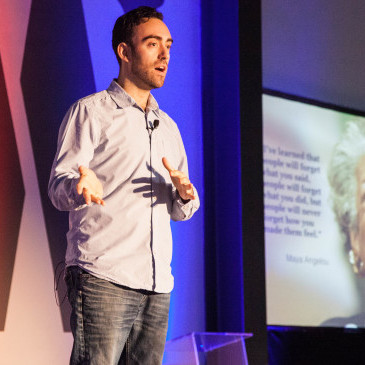 Steve Trister is a public speaking, presentation and communication skills keynote speaker. He graduated with a BA Hons in Acting from East 15 Acting School in 2003, specialising in character comedy for the last few months of his training.
On leaving drama school in 2003, Steve co-wote, co-produced and performed at the Edinburgh Fringe Festival for his professional debut, performing 24 shows in 25 days.
In 2007 Steve fell into the business world and networking. Very quickly he realised that business professionals had little or no clue how to truly engage with an audience. He discovered a terrible disease sweeping the business world. Vomiticus Contentinaatum. In laymen terms puking content.
The bug for the Edinburgh Fringe Festival never left and Steve returned with his satirical character, Guru John Popolini, the worlds #1 sucksess guru, basically poking fun at business seminars. The show, ‘The Guru’, achieved critical acclaim and resulted in Steve sharing his humorous unique style, edutaining audiences at actual conferences.
For over 12 years now Steve has used his skillset as a professional comedy actor (and his insatiable love for personal development) to transfer tools and techniques from stage and screen, into a tangible method for business professionals to become more confident, impactful and influential, every time they speak.
Since 2007, he has worked with senior leaders, professional speakers, entrepreneurs and business owners in the U.K, Europe and USA.

Why Most People Suck At Presenting

Steve is a pure genius, he recently spoke to my CEO peer group and did a truly fantastic job. Engaging, thought provoking with loads of quality takeaways my members have already booked him to do more. He has a special way of connecting with people and make them feel wanted. Look forward to many years of him training me and others.

Steve blew us away. The feedback was fabulous - with everyone taking away fresh ideas to use in their communications (all communications!) So - I've asked Steve to do it all again - and I know I'll ask him again and again. He's just dynamite and gets results - fast! have you used him yet?